A new homespital for Antwerp 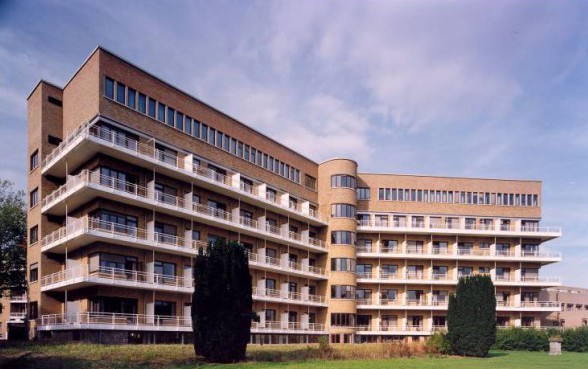 At the request of the Antwerp hospice sisters, the architect’s office Storme Van Ranst and the engineers from Atenco supervised the amalgamation of two important Antwerp hospitals: Saint-Camillus and Saint-Augustinus. The project began in 1987 and merged a new construction with a renovated one to form one purpose-built unit which satisfied the needs and desires of the patient with its advanced specialist departments and its humane architecture. The logic behind the amalgamation and expansion was to offer the highest possible standard of medica! care. For the patient, this means that he can receive help for different complaints in one multidisciplinary hospita!.

The architects were faced with strict government standards for this project with regard to the new hospita! construction, as well as with construction problems relating to the original buiding – built during the war.

The expertise gained from comleting other large hospital projects such as the University Hospita! of Antwerp or the Children’s Hospital of the Free University of Brussels, played a key role here.

They also showed great alertness in taking advantage of constantly changing techniques and standards during project execution. The same alertness which is displayed by 1200 nurses and 300 doctors every day when trying to meet the needs and desires of the 623 patients which the hospital can house.