A fresh start for the Casino Kursaal in Ostend 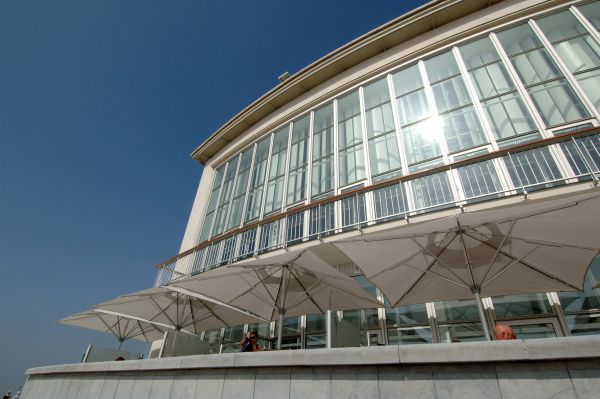 SVR-ARCHITECTS have renovated the Casino Kursaal in Ostend, a listed building dating from 1953 by Léon Stynen. Originally a bustling festival hall, which had been designed to act as a link between the city and the sea, the building was no langer used for its designated purpose and, through a number of alterations, became completely introverted. This renovation has not only restored the Casino Kursaal to its former glory but has given it transparency and modern comfort as well – and a sea view.

The original design by Stynen was characterised by its modernism, with  sober lines and a view of the sea from everywhere inside the building through the huge curved glass walls. This link with the beach and the sea has been completely restored and even extended. The new design also combines operational improvements with the quality of the original architecture.

This resulted in a complex programme: the implementation of a radical renovation (in consultation with the Monuments & Landscape Service) while offering the best possible operational opportunities. The greatest architectural challenge, however, was the large concert hall. To provide a sea view from here the stage had to be lowered by three metres. This also made it possible to create a sloping auditorium, giving the audience a better view. ‘State of the art’  technologies were also used in the areas of climate control, acoustics, theatre technology and safety. An audience of 2,200 can now sit very comfortably and enjoy a sparkling show … and the beach, the sunshine and the  sea.  At the same time, the building will now be visually linked with the outside, with a festive atmosphere inviting passers-by to corne inside.