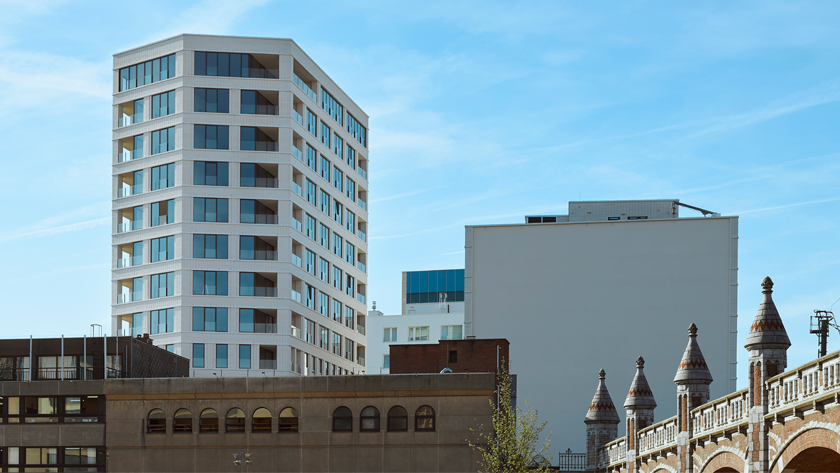 SVR-ARCHITECTS has designed an integrated complex of apartments, offices and shops near Antwerp Central Station commissioned by the developers Kairos and Life. The project forms part of the urban development plan to regenerate the dilapidated neighbourhood along the railway behind the station. With their design the architects do not turn themselves against the city. On the contrary: through targeted choices in terms of design, volumes and materials, they have created a new oxygen lung without cutting the umbilical cord connecting it to the city.
Located along the railway tracks, both apartment residents and office employees can see the trains gliding silently in and out of the station. That is why, whether you’re living or working here, you’re always travelling a bit.
Even though Kievit II is an integrated project, with residential, work and commercial functions, plus an underground car park the architects have crafted an open and transparent whole, featuring two separate towers: a high tower of apartments, with views on the city, and a lower tower with offices, overlooking the railway and the surrounding environment.
The tower with apartments has thirteen floors and, with its hexa-gonal shape, creates extra air and space compared to the adja-cent tower with offices. In the higher tower, the windows widen as the tower soars, causing it as it were to blossom upwards and outwards. The lower tower has six floors.
The façades of both buildings is in white brick. While they differ in height and volume, this forges a unity.
Once you are inside, the sounds of the city cannot be heard, although you can still see the trains gliding by and cars passing. The combination of acoustics, light and space produces a calm, serene impression.
The proximity of Central Station and easy accessibility by foot, bicycle or public transport constitute added value in terms of sustainability to this new home and workplace.