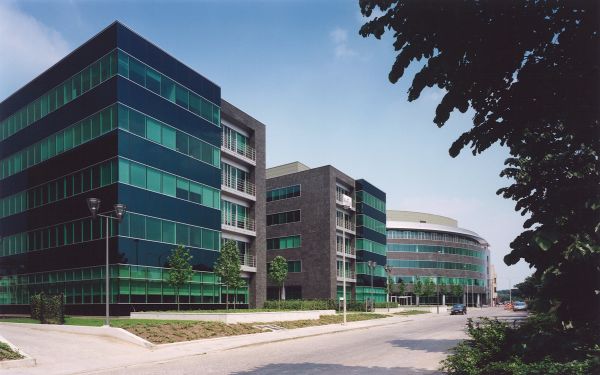 The architectural firm Storme Van Ranst was commissioned by the project developer Kaïros to design a new office campus on the Antwerp Ring. The buildings facing the Ring already form a dense facade, so the architects decided to break open this “wall” and erect four separate buildings instead of a single monolithic block that would fill in the free space again.

By placing the buildings perpendicular to the Ring they have created openings and thus introduced a refreshing variation into this “Atlantic wall”. Despite their individual expression, there is a strong sense of architectural simplicity uniting the whole.

The two central buildings form a mirror image of each other. The end buildings are very different. The one on the right has been given a curved facade with a terrace and enthouse at roof level.

Light, space and comfort are the key internal features. The spaces around the buildings have been designed as green patio areas with trees, bushes, lawns and water features.

The whole project comprises 22,500 m2 of office space and is home to major companies such as Rabo, Randstad, Regus, Graydon, Mediaxis and Loeff Claeys-Verbeke, all of whom will be using it as a base upon which to shape their own plans for the future.